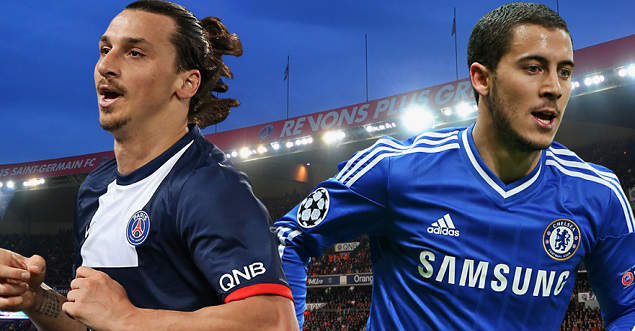 Chelsea squeezed past PSG last season with a victory at Stamford Bridge – can they repeat the trick this time? Michael Cox looks at the tactical battle…

TAfter a 1-1 draw in Paris in the first leg, this feels like an extremely well-balanced tie heading into Wednesday’s meeting at Stamford Bridge. A goalless draw would send Chelsea through, but the attacking firepower in the PSG side means keeping a clean sheet could be extremely difficult, despite what Alan Thompson (see below) thinks!

Both teams’ line-ups should remain very similar to the first leg. Neither manager has many new injury worries – John Obi Mikel is still out, and Jose Mourinho’s biggest worry is over Nemanja Matic, who reportedly injured himself in the Capital One Cup celebrations against Tottenham, despite the fact he wasn’t even playing in that match because of suspension. Nevertheless, it would be surprising if he missed out.

Mourinho is likely to continue with the more defensive format of his side, playing Ramires alongside Matic, pushing Cesc Fabregas further forward and leaving out Oscar, who has struggled in recent months. Eden Hazard and Willian will play on the flanks with Diego Costa upfront, and probably the only selection dilemma is in defence. Kurt Zouma could be preferred to Gary Cahill because of his superior pace.

Laurent Blanc should be able to call upon the services of Thiago Motta, who has recovered from injury and played against Lens in the 4-1 weekend win without any problems.

This probably means he’ll start in the deep-lying midfield position, battle with fellow ex-Barcelona midfielder Fabregas, and allow David Luiz to return to defence against his former club, alongside compatriot Thiago Silva.

This gives Blanc the option of moving Marquinhos to right-back. Although that’s not his natural position, he’s capable of playing there and Blanc might decide he wants a solid defender against Hazard, Chelsea’s main threat.

In the first leg, right-back Gregory van der Wiel got tight and coped reasonably well, and also charged past Hazard into attack – the way Chelsea were knocked out of last season’s competition, when Hazard failed to track Atletico Madrid’s Juanfran. This is the major tactical decision: does Blanc want to defend against Hazard, or be more open and attack him?

The second key battlezone is in midfield, where Marco Verratti is likely to find lots of space, as in the first leg. The reason is simple: Verratti drops extremely deep to the right of Motta to collect possession, and it’s unlikely Matic will want to push up the pitch into such an advanced position, partly because the Chelsea centre-backs will want help dealing with balls into Zlatan Ibrahimovic’s feet.

With Fabregas on Motta, and Ramires battling with the similarly energetic Blaise Matuidi, Verratti will have time to look up and play long balls over the top of the Chelsea defence.

In the first leg, PSG created almost all their chances down the left flank, because of Maxwell’s overlapping from full-back and Matuidi’s shuttling forward into attack. The likes of Ramires and Willian must help to protect Branislav Ivanovic here, with both Ezequiel Lavezzi and Edinson Cavani likely to pop up on that flank – they’re capable of switching sides.

Both also offer great pace in behind, and while Ibrahimovic might be considered PSG’s main goalscoring threat, in Champions League matches he often drops into deep positions before playing through-balls to the two South Americans, breaking forward from wide positions.

Lavezzi often races in behind but his finishing is disappointing, while Cavani missed a crucial chance in that situation at Stamford Bridge last year. Still, they might be overpriced in terms of the First Goalscorer bets. Ibrahimovic, it must be said, has a poor record at this stage of the European Cup.

Overall, expect a tight and cagey match, with both sides looking to counter. PSG will rely on quick balls in behind the Chelsea centre-backs, while Chelsea will look to break through Hazard on the left.

I’m tempted to back Under 2.5 goals, but am wary of the game opening out dramatically in the final 20 minutes if one team needs to chase the game. Therefore, I’ll instead back a half-time 0-0 at 2.8.

Recommended Bet
Back 0-0 in Half-Time Score at 2.8