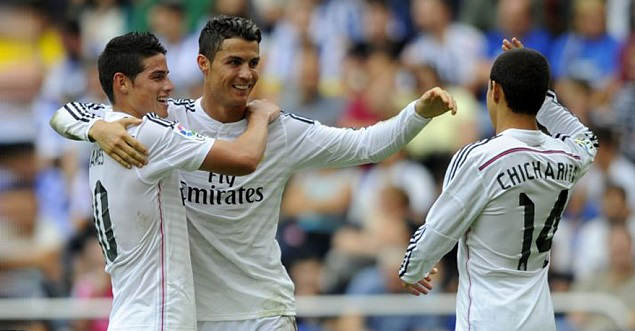 “Real Madrid have lost 4/8 on the road in La Liga recently, including 3/3 at teams in the current top six”

Two months ago, Real Madrid travelled across town to the Vicente Calderon and were whupped 4-0 by their city rivals.

The market has made a small adjustment to account for that upset – Real were more like 2.50 for that game – but still makes the visitors favourites.

Carlo Ancelotti has a full-strength team available to him this time – Marcelo, Sergio Ramos, James Rodriguez, Pepe and Luka Modric were all unavailable to him in February – but remember too that Real also came to the Calderon in January.

Atletico’s winning streak in derbies at the Calderon actually stands at three: they lifted the Super Cup trophy at the beginning of the season after winning the second leg 1-0.

Ancelotti’s record on the road to all of La Liga’s top teams is poor. In his first season Los Blancos went W0-D3-L2 visiting other top-six finishers. More recently, Real have lost 4/8 on the road against anyone, including 3/3 at teams in the current top six.

Since the start of last season, Diego Simeone’s men are W4-D4-L1 hosting top-six sides. The home side are free of major injury concerns for Tuesday’s game – Raul Garcia is doubtful, but Mario Mandzukic is apparently ready to come back into the side ahead of Fernando Torres – and they are our pick.

Atletico have won 14 of their last 22 La Liga games and, in all 14 victories, the margin of success was at least two goals.

By kick-off you might be able to back Atletico Madrid -1.5 at something around [6.5].

Seven of Real’s last nine Liga games at top-six sides have delivered Over 2.5 Goals.
Only 3/9 of Atletico’s Liga matches at home to the top six have brought the same level of entertainment. Atletico shut out their opponents in 5/9.

There are no particularly exciting trends here and, with Real failing to score in 270 minutes of football at the Calderon this season, it’s hard to argue with Under 2.5 Goals starting a 1.80 favourite.

Atletico to Win to Nil has been the right bet three times already at the Calderon this season and has some appeal at 5.30. Home and away, Atletico have logged clean sheets in 6/7 Champions League games

We noted Real’s weakness defending set pieces ahead of el clasico last month and backed a centre-half to score. Alas it was Mathieu who struck from a free-kick, not Pique, but the principle is sound.

Since the start of last season, centreback Diego Godin has struck 10 times in 79 Champions League and La Liga appearances.

We’ll add his partner to our portfolio too, once we know whether it’s Miranda (seven goals in 70 appearances over the same period) or the increasingly assured youngster Jose Gimenez.

Mario Mandzukic is another powerful threat in similar situations, as is Raul Garcia (if fit).

With goals probably in short supply, you can more than double the odds you’ll get on individual players by backing them in the First Goalscorer market. Godin, for example, should reach 26.00 or so.