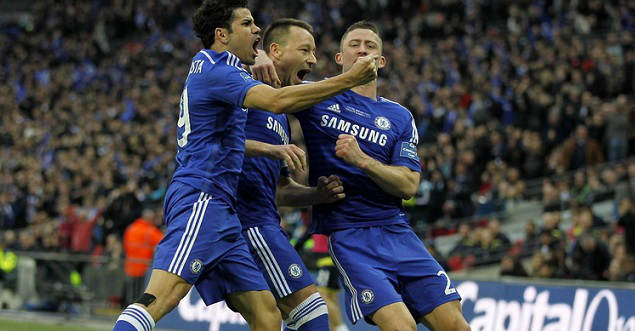 Tactically, the main question mark at Stamford Bridge is about the approach of Jose Mourinho’s side. While Chelsea’s players would be confident of defeating Manchester United on home soil, Mourinho tends to be cautious in big matches – and he knows that a point would be a decent result.

Looking at the league table explains why. A draw would mean an eight-point advantage over Chelsea’s nearest challengers Arsenal, having played the same number of games. A defeat, however, would make Manchester United their closest rivals – they’d be just five points behind Chelsea, albeit having played an extra game. A win? Well, that would be a huge boost for Chelsea, but in these kind of situations, you can usually rely upon Mourinho to be defensive.

A cautious approach is even more likely considering Chelsea are without the injured Diego Costa, with Loic Remy also a doubt. This could mean Didier Drogba leading the line instead, which would change Chelsea’s approach – he’s no longer capable of running the channels with pace, and would instead focus on bullying Chris Smalling and Phil Jones, something he can still do.

Mourinho will probably continue with the more defensive of his midfield formats, which means Cesc Fabregas in an advanced midfield role, and Ramires sitting alongside Nemanja Matic to provide more structure and protection for Chelsea’s backline. Otherwise, Mourinho has few selection dilemmas.

The same must be said of Louis van Gaal, who will name an unchanged side after three impressive wins over Tottenham, Liverpool and Manchester City. Angel Di Maria must be content with a place on the bench with Ashley Young and Juan Mata in good form, while Robin van Persie could return from injury, but is unlikely to displace Wayne Rooney from the starting XI.

Arguably the player with the biggest job here will be Matic, who will play to the left of Chelsea’s holding midfield duo. In theory, he’ll be up against Manchester United’s Ander Herrera, the busy midfielder who has been in excellent form recently, but he’ll also have his eye on other players.

Mata will drift into his zone dangerously from the right, while Matic might also have to mark Marouane Fellaini when the Belgian moves forward, even if he’s been starting towards the opposite side of the pitch. With Rooney likely to drop deep, and John Terry and Gary Cahill unlikely to track him too far, Matic could have a huge role to play – which is why Mourinho will give him assistance in the form of Ramires.

With Young in fine form, Branislav Ivanovic will be tasked with stopping him in a one-versus-one battle out wide, with Willian probably dropping into a position to prevent Young receiving easy passes from Michael Carrick. The midfielder has the man who has been responsible for much of United’s possession dominance in recent weeks, and while Fabregas might attempt to mark him, Carrick has become adept at dropping into deep positions between the centre-backs to find space.

Chelsea’s attacking threat seems surprisingly meek with Fabregas not in particularly good form, Oscar out of the side, and Costa injured. In recent weeks they’ve relied heavily upon Eden Hazard, and he will relish the opportunity to attack Antonio Valencia, who has improved at right-back but still isn’t entirely comfortable in that position.

There’s a question about whether Hazard will track back with Valencia, who can be a force on the overlap, but it’s probably beneficial for him to stay in a good counter-attacking position. He specialises in getting opponents booked, and it’s also worth considering that Hazard’s 12 Premier League goals have come in 12 different games, making him a decent ‘To Score’ bet.

Still, I can’t escape the feeling that Mourinho would be happy with a draw here. And if there’s one thing Mourinho is good at, it’s playing for, and earning, a point.

Recommended Bet
Back a draw at 3.60