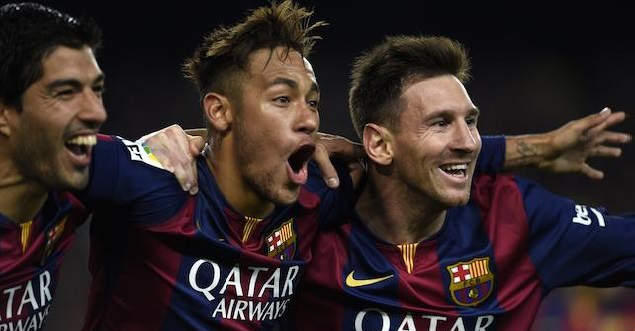 It’s the Champions League final 2014/15, with the Italian champions playing the Spanish champions – and both going for a historic treble…..

Saturday evening’s Champions League final has the makings of a classic: two European giants going for a treble in their first season under a new manager.

Intriguingly, Juventus and Barcelona haven’t played one another for over a decade, so this will be a genuinely new and exciting tactical battle.

Barcelona, of course, are strong favourites at 1.62. Their irresistible front trio of Leo Messi, Luis Suarez and Neymar will lead the charge, and Juventus’ task is simple – they need to deny those three players space.

Max Allegri has played both a three- and a four-man defence this season, but it’s highly likely he’ll use the latter here, in combination with a diamond midfield.

Playing in the inside-right channel, Suarez will be up against Andrea Barzagli (in for the injured Giorgio Chiellini) and Patrice Evra, and is likely to make lateral darts across the Juventus backline to create space for the other two forwards.

Messi will regularly drift in from the right, while Neymar will stay wider on the left before cutting inside at the final moment. Leonardo Bonucci will probably be the spare man, with Stephane Lichtsteiner forced to defend one-against-one on Neymar’s flank.

Lichtsteiner seems the most likely player to be booked here – he’s collected twelve bookings and one red card this season, while Neymar is the most-fouled player in the Champions League, and third-most in La Liga. Around 3.20 would be a good price for Lichtsteiner to be shown a card, although Neymar can get frustrated and commit bad tackles himself in big games, so look out for around 6.00 for the Brazilian in this market, too.

Juventus are likely to defend deep. While their possession-based approach has brought four straight Serie A titles, Max Allegri has ordered his side to play more counter-attacking football in Europe, and will know he can’t afford to allow Barcelona space in behind.

Although Juve will start with a diamond midfield on paper, in this European Cup run this quartet has often flatted without the ball to become a more conventional four. Andrea Pirlo will start at the base of the trio and will probably be pressured by Suarez in the opening stages, but Arturo Vidal will drop alongside him to help defend.

This will allow Claudio Marchisio and Paul Pogba to shuttle out towards attacking full-backs Jordi Alba and Daniel Alves respectively, although they’ll be forced to get through lots of lateral running. Andres Iniesta and Ivan Rakitic are likely to see lots of the ball, although Juve will be relatively happy to see them in possession in front of their midfield – it’s men between the lines they must guard against. Rakitic advances into attack more frequently than Iniesta.

Because Juventus are defending deep, their forwards will also have to drop deep to keep the side compact from back to front. In this respect, Allegri will probably have studied videos of how Atletico Madrid have played against Barca, and you can expect to see Carlos Tevez and Alvaro Morata dropping back goalside of Sergio Busquets when Barca have the ball.

From there, Juventus will attempt to work the ball forward quickly. While Barcelona are excellent at pushing their attacking full-backs forward to create triangles with the midfielders and wide forwards, Juve won’t be disappointed to see them advancing up the pitch, because it means Gerard Pique and Javier Mascherano will be forced to defend two-versus-two.

This will be a fascinating battle: Mascherano v Tevez in the battle of the Argentines, Pique v Morata in the battle of the Spaniards. Tevez is the key, and will alter his position to become a classic number ten. Expect Juve’s forwards to attempt quick one-twos to get past their opponents – and, if either turn back and hold up the play briefly, expect to see Vidal, Pogba or Marchisio to fly forward as the third man running, offering another attacking option.

Vidal’s battle with Busquets, in particular, will be key – Vidal will try to become an extra forward, so Busquets will have to become an extra centre-back.
It’s also worth pointing out that Luis Enrique will stick to his policy of using a reserve goalkeeper in the cup. Marc-Andre ter Stegen has shown his quality already this season, but isn’t quite as composed as first-choice Claudio Bravo, especially in terms of being proactive, sweeping from his box and distributing the ball.

I think Barca will make a fast start, press high and will cause Juve problems in the first 15 minutes, in particular. Therefore, if you were going to back Barca at 1.62, backing Barcelona/Barcelona in the Half-Time/Full-Time market at 2.66 might be better value.

Recommended Bets
Back Stephane Lichtsteiner to be shown a card at 3.20 or better
Back Barcelona/Barcelona in the Half-Time/Full-Time market at 2.66